Elle US February cover star Margot Robbie is interviewed by her I, Tonya co-star, Allison Janney, where she discusses her future as a director, the highlight of her career and what it was like playing Tonya Harding:

On fear of playing a real-life character: “…playing Tonya [Harding], who’s very much alive and is widely documented, can be more intimidating.”

On directing: “I still love acting. But I’ve spent the last 10 years on a film set, and I realized that if I am pouring my heart and soul into a film, I want to be one of those voices in the conversation making decisions.”

On the first highlight of her career: “When I got to New York for the first time, I took my first paycheck, walked straight into Tiffany’s on Fifth Avenue, and bought an airplane charm that goes on my bracelet. It was the best feeling ever. I got my little blue box, and I got it for myself.”

On which skill she wants to master: “I recently bought fire-twirling poles, because I really want to get good at it. When I was backpacking in the Philippines, there were heaps of fire twirlers on the beach, and it was so cool. I was like, Wow, I really want to do that!”

Jessica Chastain for InStyle US January 2015

The cover was photographed by Giampaolo Sgura with styling by Melissa Rubini. Renato Campora and Kristofer Buckle responsible for the hair styling and make up direction. (source)

Lily looks lovely with the short crop. The cover was photographed by David Roemer with styling by Jayne Pickering. Renato Campora responsible for the hair styling while Polly Osmond did the make up. (source) 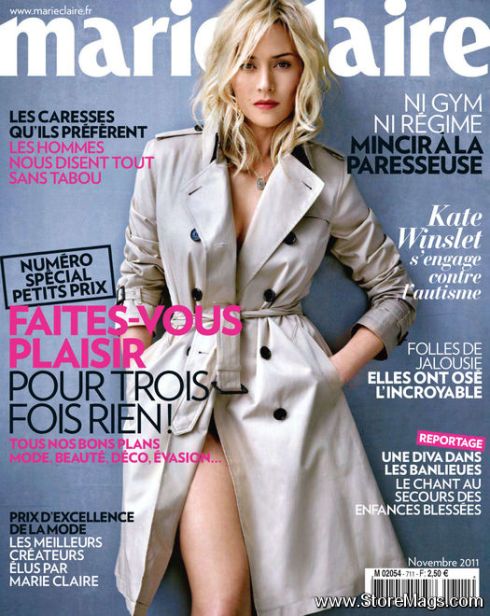 The November cover star of Harper’s Bazaar UK, Kate Winslet barely recognizable in the November cover of Marie Claire France photographed by James White with that messy hair done by Renato Campora. She was styled in Burberry trench by Isabel Dupre.

Bruna Tenorio photographed by Sheila Metzner and styled by Michel Botbol for the Fall 2011 campaign preview of Ralph Lauren Collection with make up done by Bonnie Maller and hair by Renato Campora.

Red haired Evan Rachel Wood was photographed by James White for this February cover of Vogue Mexico (last year cover girl was Lindsay Ellingson). She was on the covers of Nylon US, Glamour Italia, BlackBook, Vanity Fair US and Elle Canada earlier. Sarah Gore Reeves was the fashion editor for the shoot while Renato Campora did the hair and Patty Dubroff did the make up.

Evan Rachel Wood wore Gucci Pre Spring 2011 on the cover. She is still the face of current campaign for Gucci Guilty and Gucci Guilty Pour Homme