The mystery Dalmation for Stella McCartney Spring Summer 2010 ad campaign background has been resolved. The dalmation was named Lucky and it was photographed by Linda McCartney in 1976.

“Stella McCartney has put an old pal at the center of her spring ad campaign: Lucky, the pet dalmatian her family had when she was growing up. The black-and-white image of Lucky — shot by Linda McCartney in 1976 — serves as the backdrop to the ads, which feature Natalia Vodianova. The campaign, shot by Mert Alas and Marcus Piggott, was styled by McCartney and the art direction was done in house.

“I love the way it’s very graphic and soft at the same time, due to its double exposure,” said McCartney of her mother’s photo, which is entitled “Lucky, Sussex, 1976.” As for her choice of Mert and Marcus, McCartney told WWD: “I have known Marcus since I was a teenager and Mert from when they first met, but we never had the chance to work together. I wanted to capture their high-glamour approach over my mum’s low-maintenance way of working.”

She said the campaign images are “fashion meets reportage, mixing color, and black-and-white. A family animal with an outside atmosphere meets studio lights, camera, action! Opposites meeting in one image, illustrating the masculine and feminine sides of the Stella McCartney brand,” she said.

The ads will break in the March issues in the British, French and Italian editions of Vogue as well as in V and Pop. — Samantha Conti “ 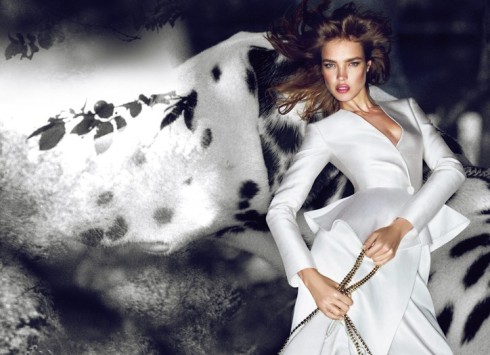