The covers are shot by Alexi Lubomirski. (source) 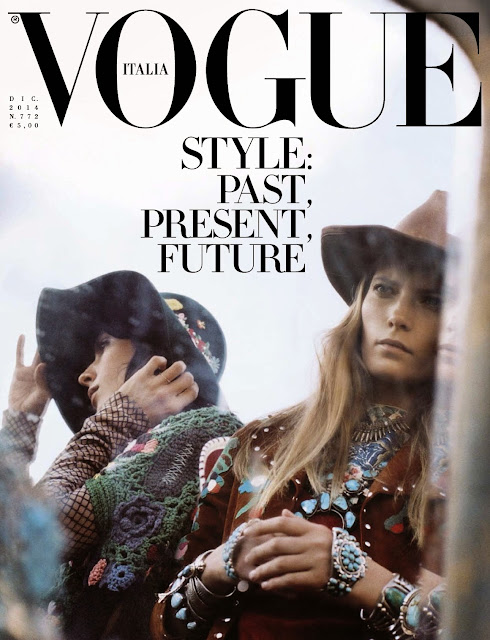 December is not even started but here we are, presenting our first 2014 covers recap already!

As usual, Numéro Tokyo is the first magazine to wrapped up their front pages line up for this year. They started the year with a soft palette cover and styling of this year’s IT model, Cara Delevingne. Valerija Kelava, with a blunt bangs, fronted the magazine’s March issue shot by Sofia Sanchez and Mauro Mongiello who shot the most covers this year. Another cover model with blunt bangs hairstyle was Vlada Roslyakova on the April issue by Ellen Von Unwerth.

Continuing their tradition of having studio shoots, Numéro Tokyo photographed most of their covers with plain backdrop in various colors. From Kiko Mizuhara beauty shot, flower girl Meghan Collison, to classic faced Julia Frauche, cool veteran catwalker Maggie Rizer to model turned actress Tao Okamoto. The only time they have outdoor shots were the one with Elizabeth Olsen (by Michael Schwartz) and Lindsey Wixson (by Guy Aroch)—our favourite image of the year from them.

The image is photographed by Marcin Tyszka and styled by Tamara Taichman. The make up and hair do were done by Maria Olsson and Marion Anée respectively. (source)

The campaign with model Valerija Kelava is shot by Daniel Jackson. (source)

Valerija is wearing Céline Spring Summer 2014 on the cover that was photographed by Sofia Sanchez and Mauro Mongiello. (source)

Vogue Portugal is getting better in their covers line up. Although the headlines are still occupied the majority of the cover, but at least they got better images compared to last year.

Some of our favourite from this year’s selection are Aida Ainulyte‘s green and white combination on February issue by Mário Príncipe; Iris Egbers‘ fiery red hair on March issue by Kevin Sinclair; Cara Delevigne‘s bold pose by Mario Testino for June; and Hana Jirickova pink-ish cover for October issue by Marcin Tyszka (the Czech model also landed the December issue of the magazine).

The most interesting cover image this year goes to Karolina Kurkova‘s January issue, shot by Giampaolo Sgura. The Czech supermodel laughed in a manic way, styled in vibrant red outfit, retro hair, and animal print details. We are strangely intrigued by the image.

The rest of the cover girls this year are featuring Kati Nescher, Sharam Diniz, Magdalena Frackowiak (we can’t wait to see her rocking the runway of this year’s Victoria’s Secret Fashion Show!), Madison Hope Headrick, Natalia Uliasz, and Valerija Kelava. Let’s hope Vogue Portugal can keep up their good works this year and impress us again next year.

Any favourite cover from Vogue Portugal? Tell us in the comment box below. In the meantime, you can read our 2012, 2011, and 2010 review by clicking the respective links.