Aokbab for Vogue Hong Kong May 2020

The covers are shot by Tada Varich. (source)

The cover is shot by Tada Varich. (source)

The cover is shot by Nat Prakobsantisuk. (source)

The cover was photographed by Tada Varich and styled by Sanshai. She is wearing Alexander Wang and Hermès on the cover. (source) 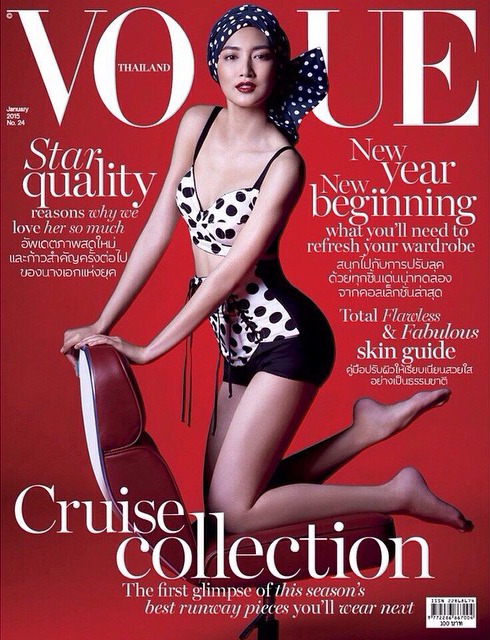 Besides Vogue Ukraine, Vogue Thailand is the latest international edition that was launched this year. Just like the Ukrainian version, Thailand Vogue also still trying to find their identity in the first year.

The magazine’s debut cover, shot by the renowned Hans Feurer, is one of the best premiere covers in Vogue history. The image shown model Si Tanwiboon wearing nothing but an intricate gold headpiece made by Philip Treacy. Another homegrown talent gracing the magazine’s cover this year was actress Aum Patcharapa, who posed in front of Tada Varich‘s lens wearing Dior.

The rest of the cover stars are top runway models. From runway veterans like Malgosia Bela, Carolyn Murphy, Naomi Campbell, and Isabeli Fontana, to social media Queens Coco Rocha and Karlie Kloss, to current established names like Liu Wen, Anais Pouliot and Kasia Struss. They posed in front of the lens from top photographers such as David Bellemere (the Russian born snapped 5 slots this year!), Lincoln Pilcher, and Marcin Tyszka.

An interesting note came from Naomi Campbell‘s November cover by Marcin Tyszka. The image sparked controversies when it was released last month because Naomi‘s skin had been heavily airbrushed and made to appear lighter. TFS reached out to Vogue Thailand for comment, and their Editor in Chief, Kullawit Laosuksri, sent back a statement. His remarks:

“The cover shot of Naomi Campbell was taken in Paris by Polish photographer Marcin Tyszka, whose signature style is pastel, with light (natural) soft colours created by using lighting techniques and make-up for his results. In his own words he explains, “Naomi is always super sexy – our idea was to create the Prada ‘60s look – more natural– pastel – sweet – soft.”

It was an incredible opportunity for me to work with such an icon as Naomi Campbell and we were so pleased that she agreed to grace our November cover. We chose Naomi because she represents a strong, intelligent and beautiful woman and we did not enhance or need to enhance her looks in any way.

We at Vogue Thailand believe in the universal beauty of women and I have had a chance to work with so many gorgeous women such as Liu Wen, Carolyn Murphy, and Coco Rocha as our cover models, and to be able to add Naomi into our portfolio is something that I am very proud of.”

The magazine has since released the final version of the cover, which shows the British supermodel with unmistakably darker skin.

What a way to start your first year.