UPDATED JUNE 02nd 2011: The cover was styled by Edward Enninful with hair by Guido Palau and make up by Pat McGrath. Details via Ford Models blog. 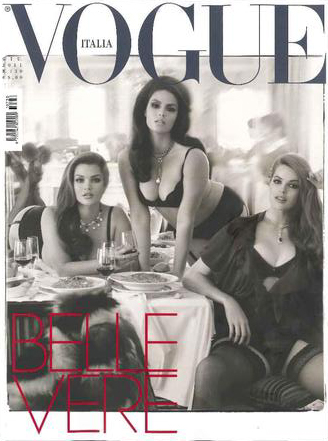 What an amazing movement by Franca Sozzani to featured three gorgeous and fabulous plus size models, Tara Lynn, Candice Huffine and Robyn Lawley.

The alluring black and white cover photographed by Steven Meisel marked the first time plus size models have graced the magazine’s cover since Sophie Dahl circa 2000.

Robyn Lawley and Tara Lynn was previously featured on magazine cover for Elle France. The first one was for April 08th 2011 issue while the latter was for March 26th 2010.

Tara Lynn and Candice Huffine are represented by Ford+ while Robyn Lawley by Wilhelmina Curve.