You know you’re in for treat when the first model out on the runway wearing a unique headpiece. Top Indonesian model Kelly Tandiono was the first girl sent out by Denny Wirawan, wearing a metallic sequined shorts, grey top, cropped jacket with beads, a heel-less platform shoes and a headpiece that looks like rice stems/rice straws.

Next girl out wearing a cropped pants, embroidered white shirt, and a cropped jacket made from Palembang’s songket fabric (he mentioned that some of the fabrics made from pineapple fiber), with similar color palettes as Kelly. The theme was “Poetique de Savane” in which the designer translated his inspiration, a dry African savanna, into a feminine, beautiful, yet strong collection with earthy and soft color tones such as brown, taupe, gold, grey, bronze, with a stroke of citrine. He wowed the audience at Jakarta Convention Center last week during Indonesia Fashion Week 2013, with 20 looks that exquisitely wearable yet still radiates traditional nuance.

Those Oscar Daniel‘s intricately natural headpieces getting more dramatic towards the end of the fashion show, where luxe evening wear (the kimono inspired dresses stole our attention) with long tulle trains were shown by Paula Verhoeven and fellow catwalkers.
It’s a true feast for the eyes, Mr. Denny Wirawan.

Browse through our Facebook fanpage, here to view the complete runway looks from Bali Java.

Please do not reproduce any images without permission. All images are courtesy of art8amby.

The senior fashion designer whose graduated from Lembaga Pengajaran Tata Busana Susan Budihardjo in 1989, mentioned in his press release that the essence of Javanese culture inspired this 2012-2013 collection by the subtle use of wiron, dodot, beskap and stagen. The glamour collection was divided into five primary color: white–which opened the first sequence, black, gold, blue and red.

The fashion show made history as the first Indonesian fashion show that streamed live through the whole world via http://www.wolipop.com and received an award from Indonesian World-Record Museum.

We posted the complete runway images on our Facebook fanpage, so your eyes can feast through those gorgeous strapless dresses with zipper details, embellished minis, lovely feather cape, body hugging dresses with crystals, amazing headpieces and accessories by Rinaldy A. Yunardi and more dresses with his signature frills, drapes and pleats.

All images courtesy of art8amby.

The opening event of Fashion Nation 2012 also presented some awards and an accompanying movie starring actress Atiqah Hasiholan that was directed by Peter Bannan in black and white to match the theme this year, Noir et Blanc: The Ultimate Style.

Even though the show delayed for an hour, but the event, especially the fashion show, was enjoyable. The MC, Aline Adita, came to the stage from the Senayan City‘s trademark: the Devil-Wears-Prada-heels-escalator and called her lovely co-host of the evening to the stage, former MTV Asia VJ Denise Keller who looks absolutely gorgeous in a nude Sapto Djojokartiko dress and sleek short ponytail!

As mentioned earlier, few awards, The Style Makers Awards to be exact, were given at the opening night of Fashion Nation. Some of this year’s winner are Kelly Tandiono (Most Stylish Model), Atiqah Hasiholan (Most Stylish Actress), Alexandra Asmasoebrata–who looks more like a model than a racer (Most Stylish Athlete) and Gaby Bakrie (Most Stylish Socialite).

Priyo Oktaviano opened the main event with his sporty yet chic collection that was dominated in gold and white colors with studs detailing. Those Mary Poppins head pieces worn by Laura Muljadi and Dominique Diyose in the finale were very stylish. Denny Wirawan presented a collection that was very Indonesian yet chic with the beautiful local fabrics and the glamour cutting.

Fashion Nation 2012 starts from April 11th until April 22nd at Senayan City, Jakarta. If you happens to be in Jakarta this month, you may also visit the installations from the participating designers from the opening night that will be displayed until the last day of the event.

Browse through our Facebook fanpage for more images from the opening night.

Please enjoy the images taken by art and amby from the backstage, rehearsal, run through and after shows of the final day of Jakarta Fashion Week 2012, Friday, November 18th 2011 at Pacific Place.

Auguste Soesastro, who once worked for Ralph Rucci, dons minimalist collection with great tailoring in cream, ivory, white and a hint of black and orange. Sally Koeswanto, who graduated from Whitehouse School of Design, Sydney in 1994, presented sexy and body hugging Chinese inspired dresses titled “Love, Passion, and Lust“. Sebastian Gunawan in his second participation for Dewi Fashion Knights gave something different from his usual elegant collection with tribal printed flowing dresses and edgy headpieces.

Sapto Djojokartiko made people gasp with towering high laser cut steel heeled shoes where the model could barely walk. His Calon Arang inspired designs were mysteriously breathtaking and very editorial ready! Last but not least, Tex Saverio, whose his gown was featured in a spread of Harper Bazaar US worn by Lady Gaga, presented gold themed collection with magnificent detailing. Lady Gaga should worn Tex‘s and Sapto‘s dresses for her next performances in our opinion.

Click on the designers name to view their complete runway images and click here to view our extensive selection of backstage images.

Hope you enjoy our photos guys 🙂

Thank you to all the models, designers, crews and everyone who made this photo report possible. 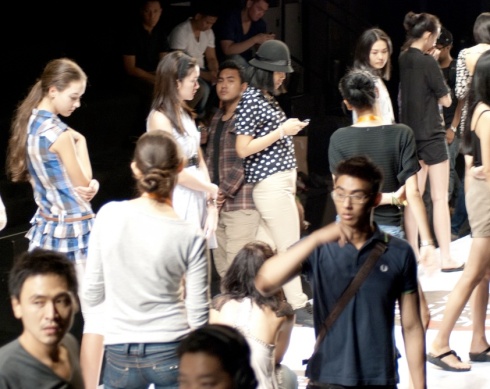 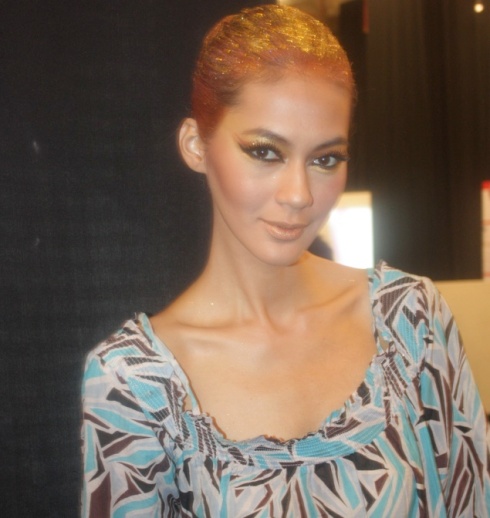 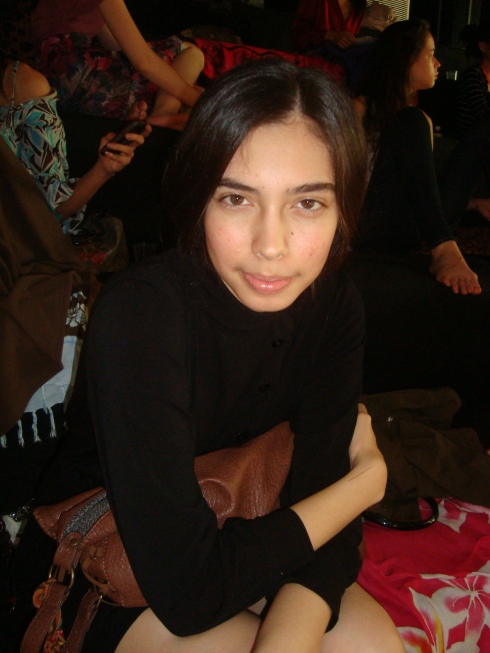 The make up and hair for this cover that was shot in Jimbaran, Taman Impian Jaya Ancol, was done by Gusnaldi and Zuber from Gusnaldi Salon Team.

Images scanned by art8amby via Sapto Djojokartiko. Please consider to link back and mention the source if you want to re-use these images. 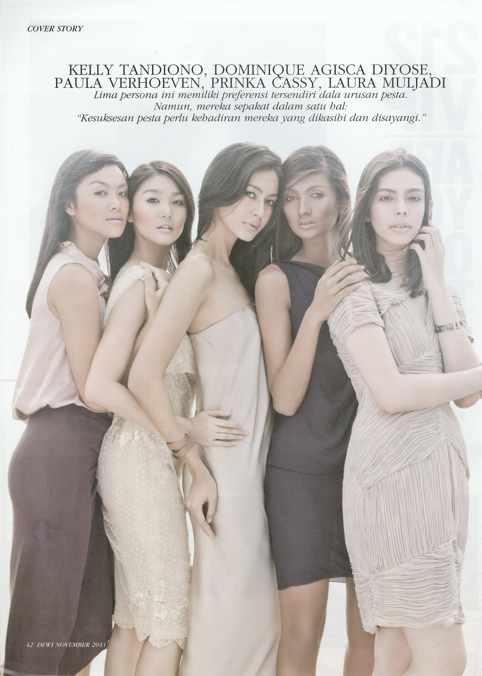 Well, it was my very first award show. Of course that year-end-awarding-event in high school doesn’t count! It feels great to just mingling, sipping wine and eat canapes (I do eat a lot, thank God to my great metabolism system) before the show started at 8.15 pm with a video presentation of Elle Indonesia‘s 3rd Anniversary fashion spreads with models Mateusz Rogenbuk (the March/April cover boy of Men’s Folio Indonesia) and the doll faced Ksenia Shapovalova (did you know that she was represented by Elite Milan?). Click here to visit the blog of Elle Indonesia‘s Associate Fashion Editor, Yoland Handoko, to see the superb fashion spreads of their 3rd Anniversary issue.

The first five awards of the night are Model of The Year – Kelly Tandiono (B Management) who looked so fresh in summer colored ensemble; Young Hairstylist of The Year – Tedza Syahriyal; Blogger of The Year – Michelle Koesnadi (the title will be ours next year, amen! LOL); Music Group of The Year – RAN (they also performed that night) and Woman Designer of The Year – Lenny Agustin who made an acceptance video due to her umrah to Mecca at the time.

Lenny Agustin presented five gold-ish looks and she was not the only designer held fashion show on the night. The others are Mel Ahyar/Luxurious Dream, Oka Diputra/Serenity Dream, Sapto Djojokartiko/Romantic Dream and Irsan/Surreal Dream. Edwan Handoko managed the choreography very well and the fabulous Qiqi Franky did the makeup. One of the highlights of the night was when Nien showed up from the opposite side of the runway and wearing a long-train kimono styled black dress. She walked gracefully and managed to presented the dress perfectly. Awesome!

The next five awards are Fashion Label of The Year – Danjyo Hiyoji; Young Make Up Artist of The Year – Husein Yunior; Young Photographer of The Year – Glenn Prasetya; Actress of The Year – Laura Basuki and Actor of The Year – Reza Rahadian. Teges Prita Soraya received a special award, Pond’s Woman of The Year and the much coveted award for Fashion Designer of The Year goes to our friend, Sapto Djojokartiko!! Congratulations mas Sapto, you deserved it!!

Images by amby and via Sapto Djojokartiko. 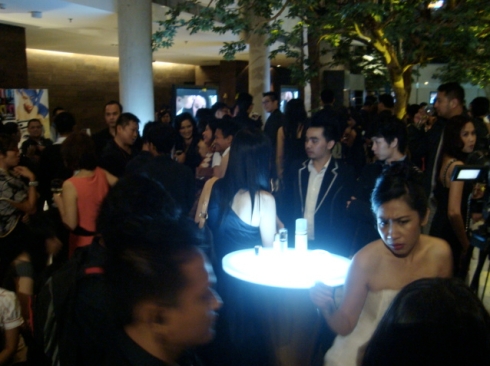 Blondes trio: Eugenia, Zoya & Masha at the make up and hair room

Nien, the girl who closed the fashion show in THAT Irsan dress! 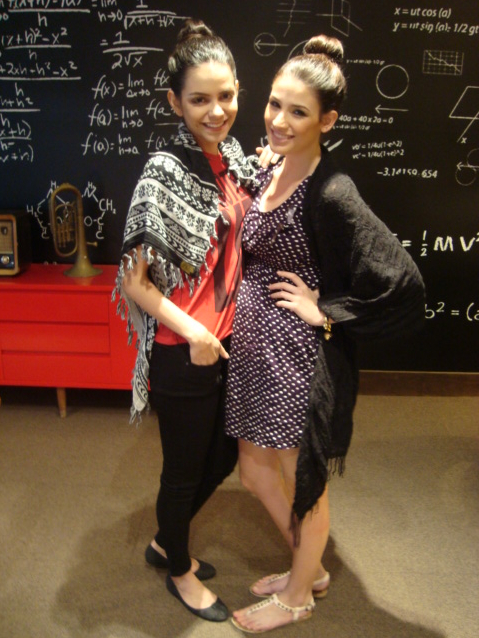 Isabela & Priscilla posed after make up and hair

Yuni before the fashion show 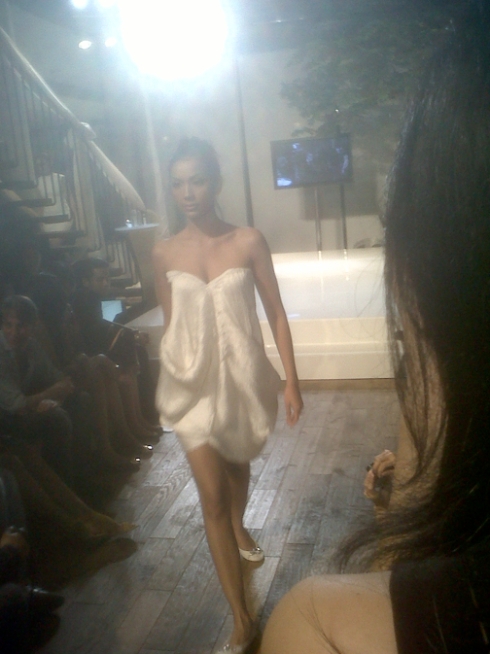 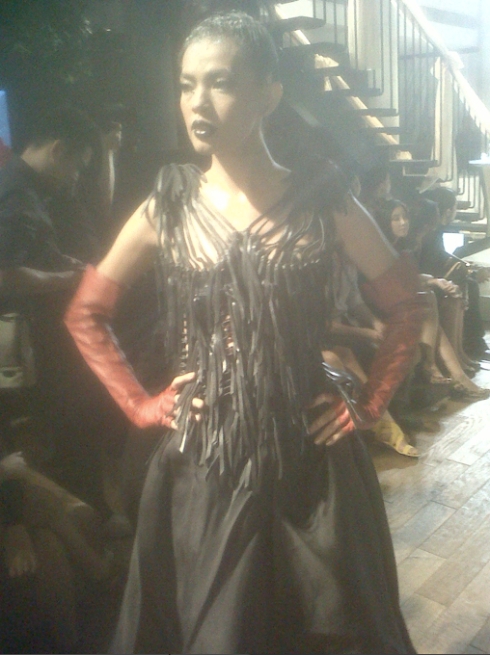 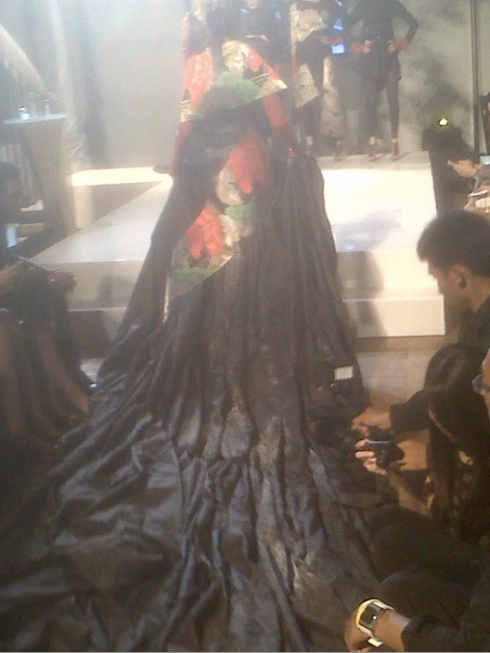 The long-train finale dress by Irsan 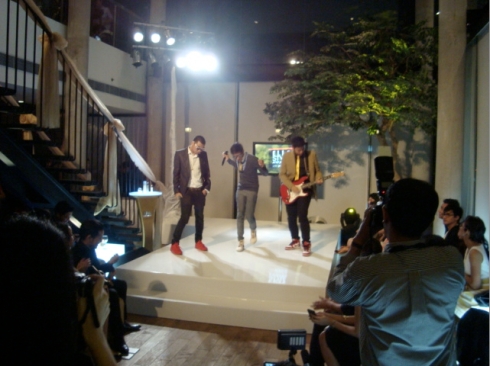 Music performance by Music Group of The Year winner - RAN

Model of The Year - Kelly Tandiono 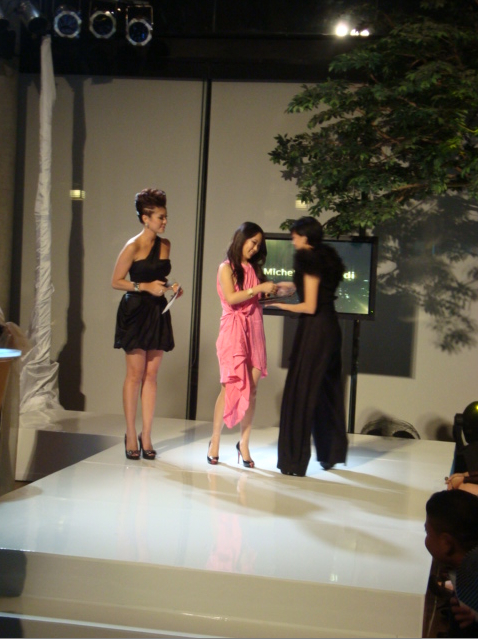 Actress of The Year - Laura Basuki 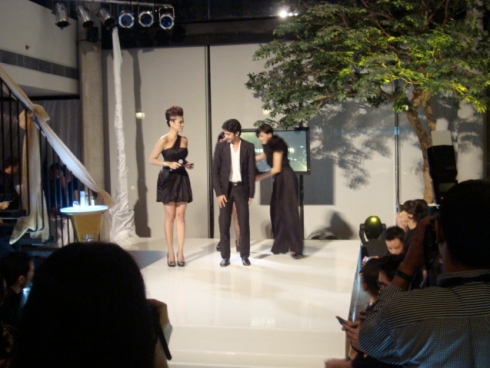 Actor of The Year - Reza Rahadian 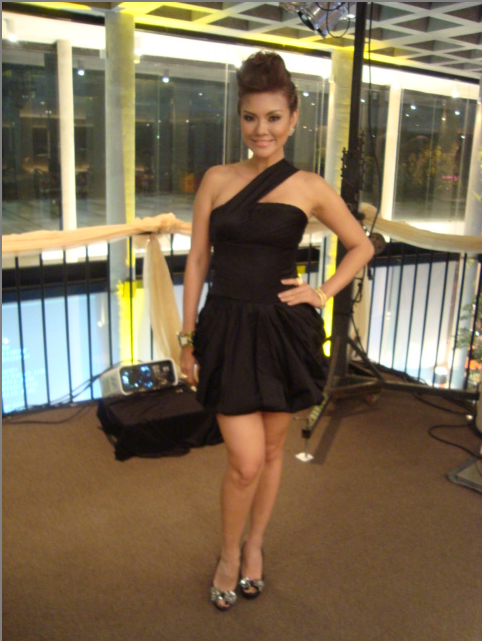 Model and Emcee of the night - Aline Adita 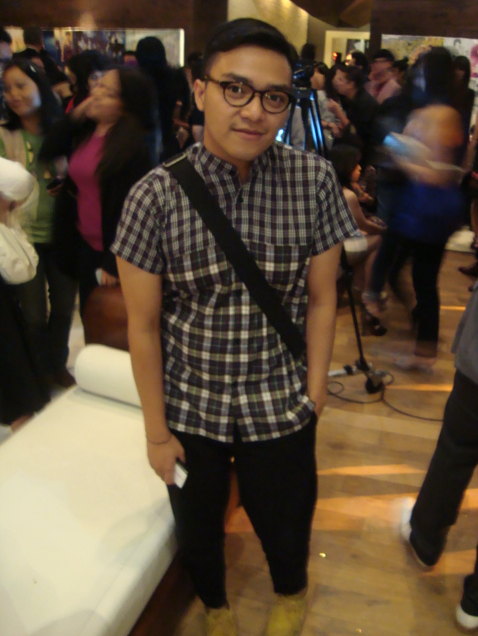 Model of The Year 2011 - Kelly Tandiono of B Management 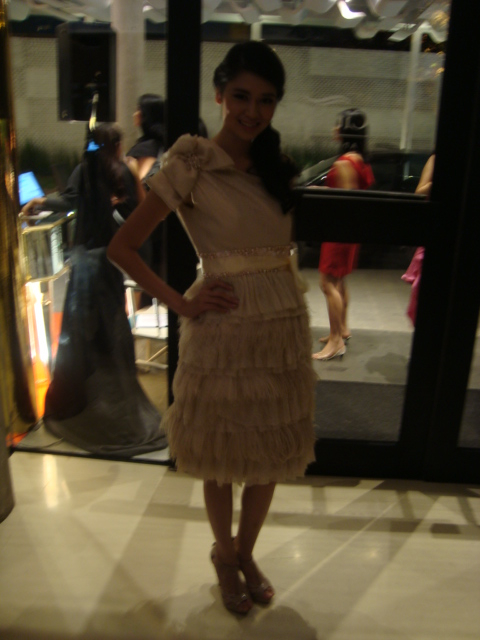 Above is a little preview of Indonesian fashion publication, dewi, February cover with Kelly Tandiono. Image via @IndonesiaMagz