It seems like Elle UK‘s cover budget is decreasing this year because almost every single cover shot was taken at studio. But who knows, even if it’s taken at studio, perhaps it was located far away from Elle UK‘s HQ. And only God knows the total amount of money they’ve paid to book those major cover stars this year. The budget probably increased instead of decreased.

This year, the Lorraine Candy-edited monthly fashion magazine (Jenny Dickinson helmed the magazine for a brief moment while Mrs.Candy had her pregnancy leave) had two cover shots outdoor, featuring Kristen Stewart and David Beckham respectively. Beckham‘s covers easily triumphed the emotionless front pages of Kristen Stewart. The colors on K-Stew‘s covers were lovely, but she failed to give sparks on the eyes. FYI, David Beckham made history because he was the first solo male cover star for the magazine.

We loved it when Elle UK used colored backdrop, because the results weren’t boring like when they used white. Just look on how boring was the May issue with Emily Blunt (the subs was way better), September with Rosie Huntington-Whiteley, October with Gwen Stefani and November issue with Jessie J (her subs also better than the newsstand version). Those gorgeous dresses can’t saved the images from being dull. There’s an exception though. The January covers with Lady Gaga was interesting because of the bright outfits and minimal text.

Young, talented and bright actors Dakota Fanning (our favourite cover star!) and Mila Kunis landed their very first Elle UK cover this year. The 18 year old was photographed by David Slijper, while the 29 year old former face of Miss Dior handbags was snapped by Doug Inglish. The rest of the cover stars are having better subscriber covers than the newsstands, in our opinion. We are loving those simple, minimalist and no-fuss images of Alexa Chung, Ashley Olsen and Cameron Diaz over their newsstands version.

Overall it’s a hit-and-miss year for Elle UK. But, we are looking forward for their next year’s line up already. Especially after they released their first 2013 cover star, Kylie Minogue (her 7th covers for the magazine!), and it looks promising.

Feel free to jump in the comment box below and share to us your favourite Elle UK covers this year.

Compared to her sister from US, Cosmopolitan UK always using white background for their covers and I kinda like it regardless the ridiculous amount of texts on it.

The only cover with the same pose and cover star as Cosmopolitan US was for July issue with Cameron Diaz and her side cleavage. I prefer Kim Kardashian‘s too-much-photoshopped May cover and Kelly Rowland‘s bad styling November issue rather than that.

The magazine featured some of British famous personalities as their cover stars for this year such as: TV presenter and model Holly Wiloughby who graced the January issue together with fellow TV presenter Fearne Cotton (she landed her second cover this year in October in a nice green sheer and satin short jumpsuit); Girls Aloud band member, Kimberley Walsh for March cover; and the quirky 23 year old recording artist Jessica Ellen Cornish or famously known as Jessie J for December.

Top singers also gracing the covers of Cosmopolitan UK this year: Beyoncé showed her sexy back on April cover, Rihanna looked absolutely stunning for August cover and Fergie, my favourite cover of the year, in a very unusual posing for September issue. Well, you can also counts Kelly Osbourne (February) and Lea Michele (June) as (occasionally) singers too, I guess. 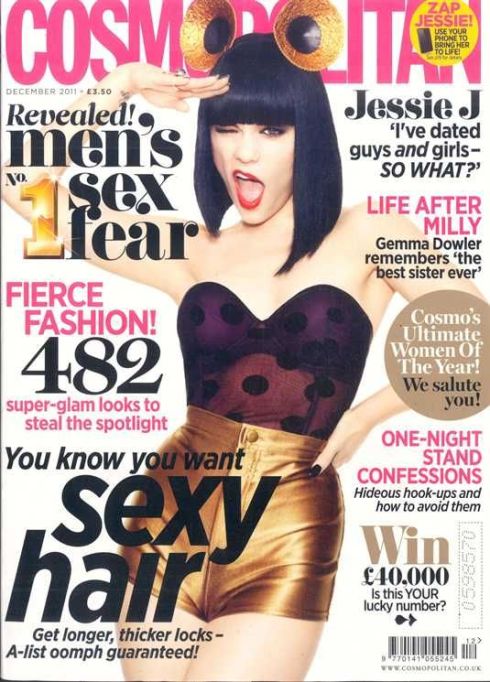 As the December 2011 covers rolling out in the newsstands, it is already that time of the year where we reviews the year’s magazine covers!

And first up, Glamour UK.

For the first cover in 2011, the magazine that launched in April 2001 featured the 43 year old singer Kylie Minogue with bouffant hair, showing off her curves. Abbey Clancy, now the wife of the famous soccer player Peter Crouch, donned the quirky styling for the February cover. My least favourite cover is this March cover featuring Lea Michele. With that modeling 101 pose? Meh. It’s just meh.

This Jo Elvin edited monthly publication (who has been edited the magazine since its launch) chose English TV and radio presenter who is really famous in England, Fearne Cotton, as their cover star to celebrating their 10th Anniversary. The only cover with minimum text.

The only cover shot outdoor this year was for May issue featuring the gorgeous Cheryl Cole. 33 year old singer and the judge of US X Factor with full name Nicole Prescovia Elikolani Valiente Scherzinger graced the June cover with cute purple dress that looked perfect with the pink masthead.

Friends With Benefit star, Mila Kunis, worn a Versus Fall Winter 2011 dress for the September issue while the returning Princess of Pop, Britney Spears, was photographed in Matthew Williamson‘s feathers and sequins dress from the same season for the October cover.

Quite similar poses was used for the November and December covers of Glamour UK featuring two of the current hottest actresses, Amanda Seyfried and Kristen Stewart. Kristen‘s is our favourite of course.

Well, that’s our very first 2011 covers recap. Make sure to keep visiting art8amby for more of it. You can also read last year’s recap, here. 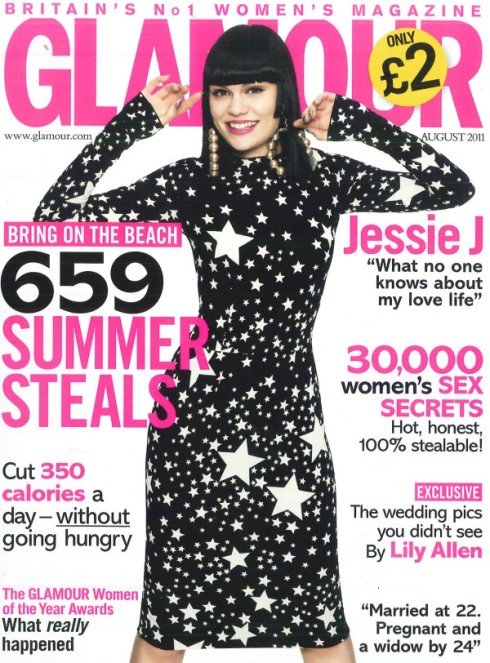 Images via Jessica Forum and Style.com 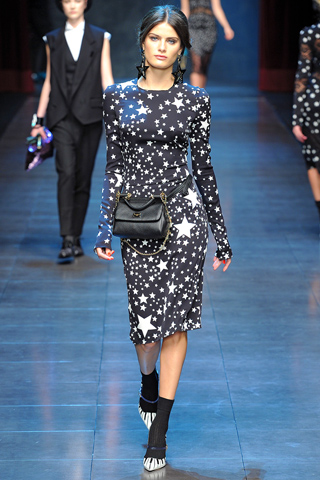