Wasting no time following up their collaborations with Gareth Pugh and Daphne Guinness, MAC cosmetics have announced their latest limited edition line, in collaboration with eccentric fashion icon, Iris Apfel. The twenty-piece collection features lipsticks, shadows and blushes and is set to hit stores January 05th next year. The launch will mark yet another collaborative venture for this 90-year-old style maven, following her controversial jewellery line released earlier this year, and New York’s Metropolitan Museum of Art exhibit dedicated to Apfel’s impressive wardrobe. Pioneer of a high-fashion-meets-vintage aesthetic, Apfel has been effortlessly pairing haute couture with thrift store finds since long before it became de rigueur.

The upcoming MAC x Iris Apfel collection is as colourful as Apfel herself and features products such as the ‘Party Parrot’ lipstick or the ‘Loudmouth Orange’. The collection is only available for a limited time, between January 05th and February 09th, so shoppers will have to get in quick if they want to take home their own piece of MAC by Apfel. Showing no signs of slowing down anytime soon, the self-confessed geriatric starlet is on a roll and things just seem to be on the up and up for Mrs. Iris Apfel.

Images and quote are via Oyster Mag. 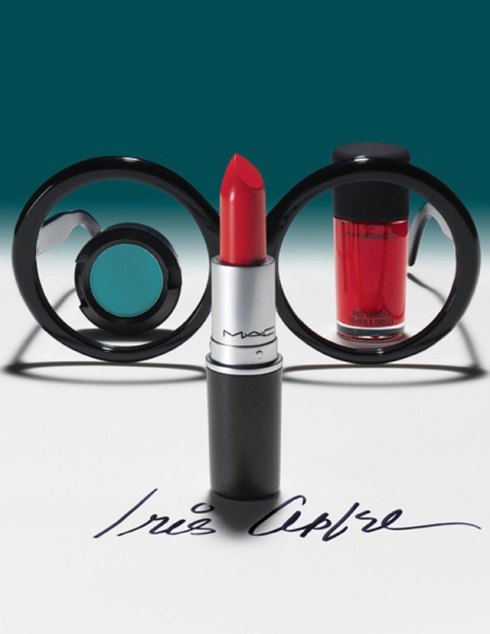