The first peek of the covers of Vogue Italia June 2015 The China Issue. Now we just need the confirmation of who photographed those covers to confirm whether or not Steven Meisel still works with Franca Sozzani at VI. We can see Shu Pei Qin, Jing Wen, Yun Bao Chao, Fernanda Ly, Fei Fei Sun, and Xiao Wen Ju on the covers. (source)

UPDATED FEBRUARY 04TH 2015: The blurry male model is the back is Phil Sullivan of America’s Next Top Model.

This is super amazing! Steven Meisel and Vogue Italia gathered 50 of their all time favourite models for the 50th anniversary issue of the Franca Sozzani-helmed monthly publication.

Franca Sozzani tapped her current fave models for the latest cover from Vogue Italia that was snapped by Steven Meisel. Karl Templer did the styling while Guido responsible for the hair.

Inside the fold out cover you’ll also find Vanessa Moody and Julia Nobis. Some of the male models identified are RJ King, David Flinn and Geron McKinley. (source) 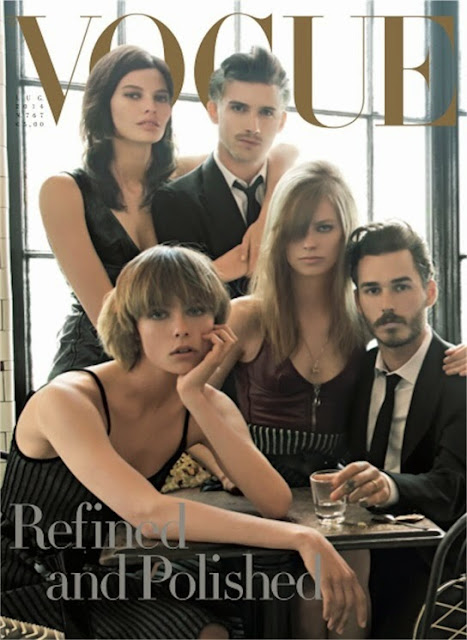 British model and Fall Winter 2013 campaign queen Edie Campbell is clearly snatched the title of Vogue Italia‘s current favourite model. She was photographed three times by Steven Meisel on the front pages this year. From the quirky and unusual look on the April issue, to the effortlessly beautiful May cover with runway veteran Karen Elson, to the classic black and white image on the October issue. Franca Sozzani and her long time collaborator Steven Meisel really loves the 5′ 9″ model.

Another favourite this year is American stunner Amanda Murphy, who is also the current fave of Miuccia Prada. The model who landed #18 spot on Models.com prestigious Top 50 list graced Vogue Italia‘s July and August issue respectively. Brazilian powerhouse Gisele Bundchen has been a long time regular cover star for the magazine, and this year she added two more slots to her ever growing cover list. She once again collaborating with Steven Meisel for the June issue, and also featured as one of the many cover subjects for the magazine’s July edition (alongside Tony Ward, Linda Evangelista, Natalia Vodianova, Raquel Zimmermann, RJ King, Dorian Reeves, Peter Marino, John Pearson, Ethan James, Cameron Russell, Frederik Meijnen, Meghan Collison, and Louis Steyaert)

The statuesque Hungarian Vanessa Axente was the Edie Campbell of 2012. She got featured twice on the cover last year, and in 2013 she landed yet another cover (for March issue with promising new male model Gustav Swedberg). This marked her third appearances for the monthly fashion publication in less than a year! Talk about a future established star in the making.

Stella Tennant (in Gucci) is not the only cover girl for Vogue Italia July issue. Because Franca Sozzani (she’s celebrating her 25th year as the magazine’s Editor in Chief) and Steven Meisel give us more option to choose from their latest edition!

Which cover is your favourite?

If it’s not broken, don’t fix it. That’s how we put the collaboration between photographer Steven Meisel and Vogue Italia that has been going strong for more than 20 years and still counting.

Sometimes they created magic on the covers (i.e the April issue with models Aaron Vernon, Chrystal Copland, Ethan James, Lyle Lodwick, Thairine Garcia and Sojourner Morell; September issue with Carolyn Murphy, and December with Vanessa Axente and Marlon Teixeira), sometimes they created something that’s so dull even though they tapped a great cover star (we are looking at you Mrs. Isabella Rossellini). And they certainly really knows how to liven up the hype, as the current IT model Kate Upton landed one of the most coveted cover slots in the world of fashion publication.

Vogue Italia always came up with something different from the other Vogue editions, and we respect that. Especially the minimalist text on the cover. Franca Sozzani already made history this year as she chose Fei Fei Sun as the magazine’s first ever Asian cover girl! We are looking forward to see what Franca will bring in 2013.

Read our recap of the magazine’s 2011 line up, here and 2010 line up, here. Don’t forget to share which cover is your favourite from Vogue Italia in the comment box below.

24 year old Danish top model, Freja Beha Erichsen, landed her third Vogue Italia covers in less than a year! Right after her front page slot in March and November 2010, she was featured for the first 2011 cover of Vogue Italia along with her now rumored girlfriend, Arizona Muse, photographed by regular photographer for more than 20 years, Steven Meisel.

Freja Beha Erichsen was not the only returning cover girl for this year’s models line up, because catwalk veteran Kristen McMenamy (August 2010) and the possible new Angel of Victoria’s Secret’s, Karlie Kloss (January 2010), are both returning for another snapped once again by Steven Meisel for the 2011’s May and December issues respectively.

South African born Victoria’s Secret Angel, Candice Swanepoel, was a bombshell on the February issue while the similar hairstyle was sported by Raquel Zimmermann on the dull August cover, my least favourite. But, thankfully, Steven Meisel make it up Raquel Zimmermann‘s boring cover with the exceptionally amazing November issue. One of this year’s best cover! Saskia de Brauw‘s March issue and the sultry black and white June cover featuring three plus size models who looked gorgeous and fabulous: Tara Lynn, Candice Huffine and Robyn Lawley, are amongst this year’s best covers too.

Red haired model/musician, Karen Elson returning to the front page of Vogue Italia for the first time since December 2006 with the same grace and elegance for October. The former face of Missoni, Kristina Salinovic landed her first Vogue Italia cover for April as well as one of the current faces of Balenciaga, Juliane Grüner, for July issue. Last but not least, top model Stella Tennant shocked the fashion industry with her 13 inch waist (that’s not her real waist, right?) and appeared on the September cover of the magazine photographed by Steven Meisel.

Share to us your favourite covers from Vogue Italia this year, guys. You can also read our review of last year’s covers line up, here 😉

61 year old Editor in Chief of Vogue Italia, the one and only Franca Sozzani is wearing Burberry glossy trench coat on the latest cover image of Industrie Magazine photographed by Terry Richardson and styled by Katie Grand.

UPDATED JUNE 02nd 2011: The cover was styled by Edward Enninful with hair by Guido Palau and make up by Pat McGrath. Details via Ford Models blog.

What an amazing movement by Franca Sozzani to featured three gorgeous and fabulous plus size models, Tara Lynn, Candice Huffine and Robyn Lawley.

The alluring black and white cover photographed by Steven Meisel marked the first time plus size models have graced the magazine’s cover since Sophie Dahl circa 2000.

Robyn Lawley and Tara Lynn was previously featured on magazine cover for Elle France. The first one was for April 08th 2011 issue while the latter was for March 26th 2010.

Tara Lynn and Candice Huffine are represented by Ford+ while Robyn Lawley by Wilhelmina Curve.