The cover is a reprint from Elle UK January 2014, shot by David Vasiljevic. (source)

Elle UK surely loves their homegrown talents. The 28 year old singer is landed yet another cover for the monthly fashion publication. She was photographed wearing Miu Miu Spring Summer 2014 by David Vasiljevic for the cover. (source)

Former Burberry Brit model and the rumoured girlfriend of Bradley Cooper, Suki Waterhouse is landed her first ever Elle UK cover. The image was photographed by David Vasiljevic. Read our this year’s recap on the magazine’s covers, here. (source) 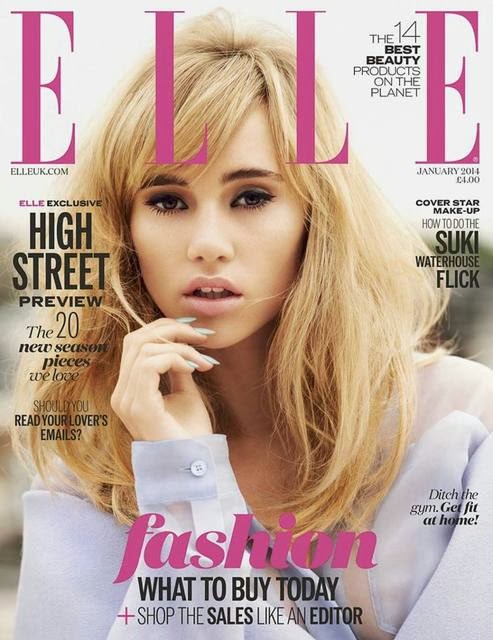 InStyle UK really stepping up their covers this year. Even though they still use their signature soft pale mastheads and headlines, but the cover star choice, the styling and the pose were perfect!

They started with Academy Award-nominated actress Jessica Chastain who looks amazing in cropped top and fiery hair posing in front of Micaela Rossato‘s lens for February issue. New York based Rossato (who was born in Cordoba, Argentina) also photographed two other cover slots with Rebecca Hall and Naomi Watts, which we love.

The only glitch was on the first issue of 2013. The worst cover of the year, or even in their history, goes to Gwyneth Paltrow’s January issue by Giampaolo Sgura. See the image here, and you’ll see what we are talking about. Worst photoshop, ever!

Which one is your favourite cover from InStyle UK this year? Share to us in the comment box below. You can also reado our 2012, 2011, and 2010 recaps.

Elle UK produced mainly close up shots for their subscriber covers line up this year. We don’t know whether it’s intentional or not. But some of them are stunning! We are talking about Kylie Minogue’s ethereal shot by Cuneyt Akeroglu, Scarlett Johansson’s beautifully demure photo by Rankin, Miley Cyrus striking black and white profile by Jan Welters, and Anne Vyalitsyna’s regal blue cover by Kai Z Feng.

On the other hand, their newsstand covers were not really stands out. The only newsstands version that caught our attention were Natalie Portman’s November and Candice Swanepoel’s December issue (she’s gonna wear that $10 million bra in this year’s Victoria’s Secret Fashion Show). Even though the magazine had gone through quite a drastic make over on the cover (sleeker fonts, cleaner layout) but those gorgeous subscriber covers that wins us over.

Vogue Turkey has been one of those international editions with outstanding covers line up since their first issue back in 2010. They started 2012 with runway regular Elsa Sylvan in a rich red fur coat, shot against neutral background by KT Auleta. The New York born photographer also photographed the current campaign face of Estée Lauder, Constance Jablonski for the magazine’s June issue. Fellow spokesmodel of the giant cosmetic brand, Joan Smalls also made appearance on the December cover, by Cuneyt Akeroglu.

The famed Turkish photographer also snapped two other 2012 editions from Vogue Turkey: the April issue with Lara Stone, and September with Natasha Poly. The magazine also made history by producing one artsy yet controversial cover for their November art issue, created by Tanner Ceylan. It’s very unusual for Vogue to produced something as intriguing yet amazing like that.

The rest of the cover stars this year are Karolina Kurkova for February (by Alexei Hay), Angelina Jolie for March (by Mert Alas & Marcus Piggott), Aline Weber for May (by David Vasiljevic), Carola Remer for July (by Laurence Passera), Miranda Kerr for August (by Sofia Sanchez & Mauro Mongiello), and Laetitia Casta for October (by Sean & Seng).

Share to us your favourite ones from Vogue Turkey in the comment box below. And you can also read our 2011 recap, here.

The cover was photographed by David Vasiljevic.

This is a nice use of reprint of her editorial images from Elle UK September 2012, photographed by David Vasiljevic.