Such a nice original cover from Vogue Portugal. (source) 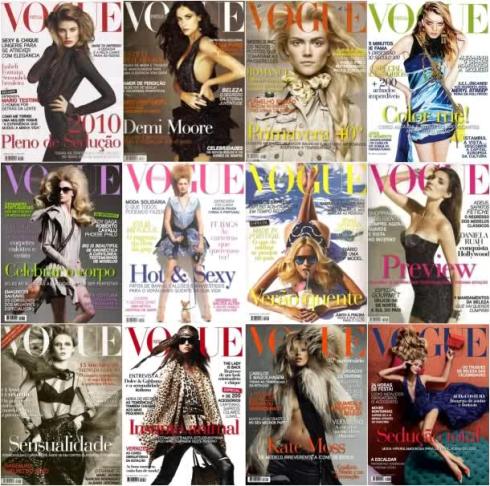 Isabeli Fontana was Vogue Portugal first cover girl in 2010, where she posed in white background wearing black outfit lensed by Marcin Tyszka while Demi Moore showed quite similar posed for February. It was a reprint from W magazine shot by Mert Alas & Marcus Piggott and Kasia Struss (she was the last girl to closed the last show of New York Fashion Week Fall 2010 earlier this year before moved to Bryant Park from Lincoln Center) spread from Vogue US by David Sims was the March cover. Another reprint.

Bregje Heinen cover for April my favourite from Vogue Portugal, the dress and the green header. I always have a thing for green header :D. While big haired Viviane Orth for May is my least favourite this year, the purple header doesn’t match with the background and headlines font colors. Their June cover, where Vogue Portugal featured a reprint of Vogue Germany March 2010 spread with Karolin Wolter and a dog photographed by Thomas Schenk.

Natasha Poly spread from Vogue Paris May 2010 by Mario Sorrenti was another reprint for Vogue Portugal. This time they used the image for July cover (it was Natasha Poly’s third Vogue cover in 2010 and she ended this year as the model with most featured on Vogue global editions!!). Actress Daniela Ruah was the girl featured on August cover shot by Marcin Tyszka. Olga Sherer landed a black and white cover for September as she lensed by Bojana Tatarska. Newcomer Pauline Van Der Cruysse rocked animal print for October photographed by Thomas Schenk.

Last reprint this year was Kate Moss by Patrick Demarchelier from Vogue UK September 2010 spread for November. While Ana Beatriz Barros lensed by Sølve Sundsbø in a unique shot from above for December. I quite like this one.

So, I was not very impressed with this year’s cover of Vogue Purtogal 😀 Hopefully next year they featured less reprint.