She looks amazing for a 43 year old mother of three children. Anyway, the cover was snapped by David Roemer. (source)

Claudia Schiffer is returning to the brand that created one of her most iconic images, denim brand Guess, as the face of its 30th Anniversary Collection. Inspired by Guess pieces worn by famous Guess girls over the past three decades, the 15-piece collection features – amongst other pieces – wide-neck T-shirts bearing images of Line Gost and Anna Nicole Smith; jeans with a cut-off waistband originally modelled by Adriana Lima; and a sleeveless monochrome gingham top worn by Eva Herzigova.

“Guess will always have a soft spot in my heart, and I’m excited that 23 years later we can still work together so successfully,” Schiffer – who appeared in six campaigns between 1989 to 1991 – told WWD. “Shooting the Guess 30th anniversary campaign was like going back in time. It brought back so many great memories and has been a lot of fun working together again with Ellen and Paul.”

Shot – as her original campaign images were – by Ellen von Unwerth, the new images feature Schiffer with Bardot-esque hair, photographed in Sorrento in Italy, and bear the slogan “30 sexy years!”

The new collection will launch worldwide in April in Guess stores and on a new website – http://www.guess1981.com, which also launches next month – created especially for the anniversary.

Jessica Simpson for Elle US April 2012

The pose is not new, you’ve seen it on the August 1991 cover of Vanity Fair with Demi Moore (shot famously by Annie Leibovitz) and Claudia Schiffer on the cover of Vogue Germany June 2010 (by Karl Lagerfeld). She is definitely channelling the first.

Elle US should’ve done it differently. Maybe something like that August 2006 cover of Harper’s Bazaar US with Britney Spears who was snapped fabulously by Alexi Lubomirski?

They could’ve do something better than this. Meh.

The second cover slot this year was belong to Constance Jablonski, as she was photographed by Alex Cayley in Dolce & Gabbana‘s lace dress from the Spring Summer 2011 collection. The French beauty also landed three more international Vogue covers, just like the Czech born Karolina.

Vogue Spain closed the year with two great covers featuring one naked Natasha Poly by Inez & Vinoodh for November and Dree Hemingway (and a baby) by Bruce Weber for December. 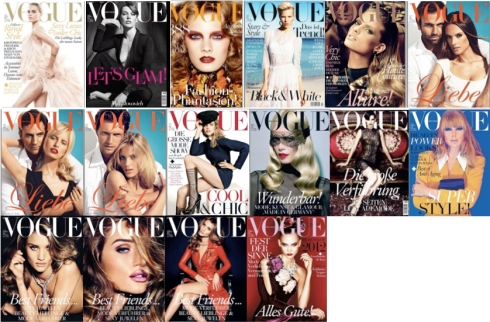 Christiane Arp edited magazine, Vogue Germany, gave two extra covers this year. In 2010, the total tally was 14 covers, and they gave better line up this time than last year.

Started with Maryna Linchuk in a beautiful soft pink Chanel dress photographed by Greg Kadel for January issue. And then one of the 2012 Pirelli Calendar models, Milla Jovovich, who graced the black and white February cover lensed by Francesco Carrozzini while the Estée Lauder spokesmodel, Constance Jablonski (last year she landed another important cover slot, the September issue) snapped strikingly by Alexi Lubomirski in Alexander McQueen‘s signature butterflies collection for the March cover.

Another three different covers for a single edition from Vogue Germany this year was for November issue with model and budding actress, Rosie Huntington-Whiteley. She was photographed by Alexi Lubomirski for the Fashion, Beauty and Jewelry covers. Supermodel Claudia Schiffer returns as Vogue Germany cover star this year in one of my favourite works from Miles Aldridge, the August issue. Last year, the 41 year old featured for the June front page, naked and pregnant!

So, what’s your favourite cover this year, guys? 🙂