The campaign with Naomi Campbell is photographed by Mert Alas & Marcus Piggott. (source)

Amrit is photographed by Arnaud Lajeunie for the campaign. (source)

For the Resort 2021 collection of Balmain Men, Olivier Rousteing looked up to one of his favourite TV shows, “Fresh Prince of Bel Air” as he binge-watch it during the COVID-19 stay-at-home period. The upbeat spirit and vibrant style from the hit ’90s series are translated into bright tones, sharp tailoring and incredible graphic patterns.

Key designs from the series are married with Balmain‘s signatures and silhouettes such as six-button, military-inspired tailoring, khaki tones, and double-breasted jacket.

The collection is referred as “Zoom” collection, since Olivier and his team needed to rely on a whole new series of tools to create the designs. Olivier, his team, Balmain ateliers, and all of the craftsmen are forced to figure out how to work together in entirely new ways during the lockdown. “We all somehow managed to work closer than ever before, in order to produce a collection that meets this house’s high standards, in spite of all the difficulties that needed to be overcome. My team’s dedication, pride and talents are clearly reflected in each and every piece of this offering,” Rousteing said in a statement to art8amby.

In addition, the brand also introducing their first concrete steps toward the long-term goal of creating truly sustainable collections. The Resort 2021 collection is made up of a selection of tees, polos and sweats fashioned from Ecocert-certified organic cotton. The looks are also created at renewable-energy powered European production facilities located to their global distribution centers. All of the products rely on 100% compostable packaging, as well as recycled polyster labels and hang tags using recycled string and paper from Forest Stewardship Council sustainably managed forests. Visit the link here to see the complete collection on our Facebook page. (source)

The campaign with Tami Williams and Africa Penalver is shot by Mariya Pepelanova. (source)

35-year-old Oscar-winning actress Lupita Nyong’o is gearing up to star in Jordan Peele’s next horror film, Us, in theaters March 22nd.

Inside the pages of Marie Claire US (the March 2019 cover is photographed by Daria Kobayashi Ritch, styled by Joseph Errico in a Balmain dress), Nyong’o opens up about why she considers horror films to be a cathartic experience, what she treated herself to after the opening of Black Panther, her father being a feminist, and why we have to retain vigor within this political climate.

On working with Jordan Peele for their film Us: “He [Peele] asked me, ‘What is your process as an actor? What do you need from a director? And I just started to cry. I was like, ‘I’ve never been asked that before.’ I could just tell in that question was a man who understood what it meant to be an actor…

On what she treated herself to following the success of Black Panther: “I went on a 10-day silent retreat. It was a gift. I did it for my birthday.”

On what she hopes to provide with first her children’s book, Sulwe: “In no way do I imagine a child will read this and never have a problem with the world discriminating against their skin or themselves discriminating again their skin. But at least you have a foundation. You have something that reminds you that you are enough.” *Sulwe is due out later this year.

On the support from her father: “It makes a huge difference to have a father who champions you. My dad was a feminist before it was cool for men to be feminists – his father too in many ways.”

On not becoming passive during within the current political climate: “Right now it’s a very, very polarizing environment. The pendulum has swung to the nth degree. But it’s important that we still find vigor when things are not that extreme because it’s in those moments when the pendulum is just swinging side to side that the most damage can be done. That’s when you get passive when things aren’t that bad. Before you know it, things are terrible again, because we fell asleep at the wheel.” Image courtesy of Marie Claire. (source)

Balmain is launching a series of additional short films and images (aptly named Balmain Beat Volume II which features the latest edition of the iconic BBox bag) for the recently released Fall Winter 2018 ad campaign, all images were shot by An Le while the video is directed by Jake Nava and featuring London’s Mina Rose.

Hair and make up by Balmain Hair Couture and Dani Guinsberg.

Each aims to channel the same raw energy and minimal styling of the original Fall Winter 2018 campaign with Milla Jovovich video, while highlighting the latest designs from Olivier Rousteing and his team. (source) 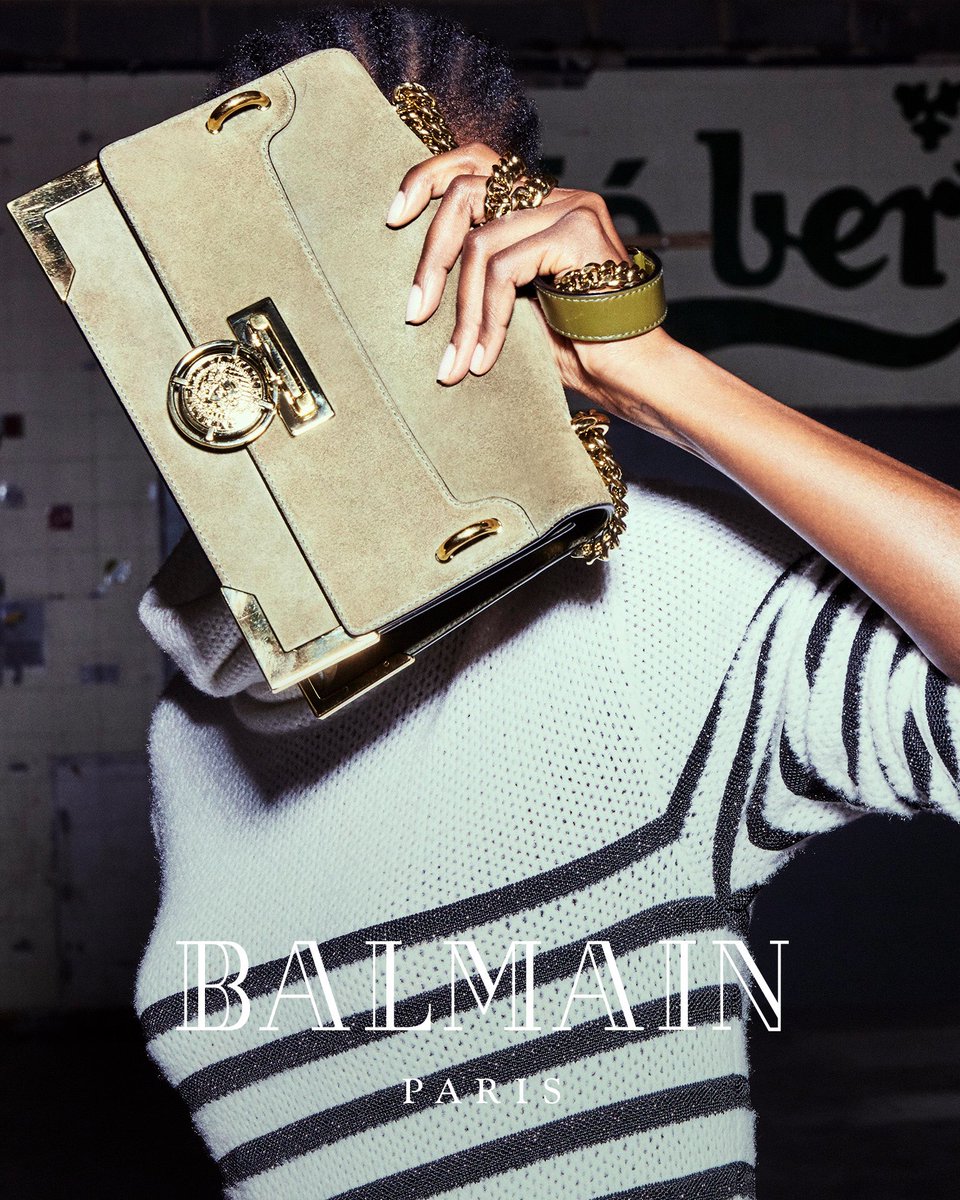 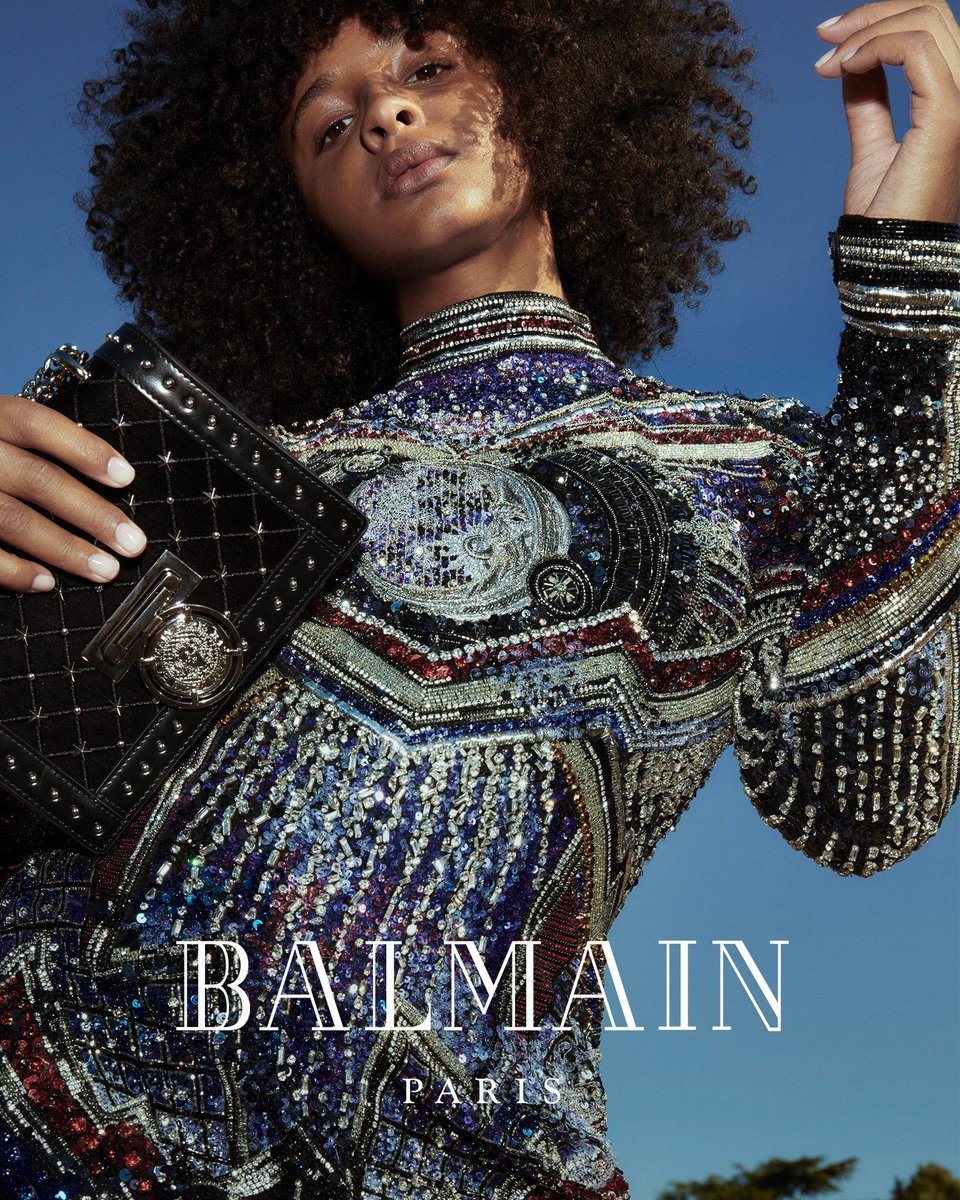 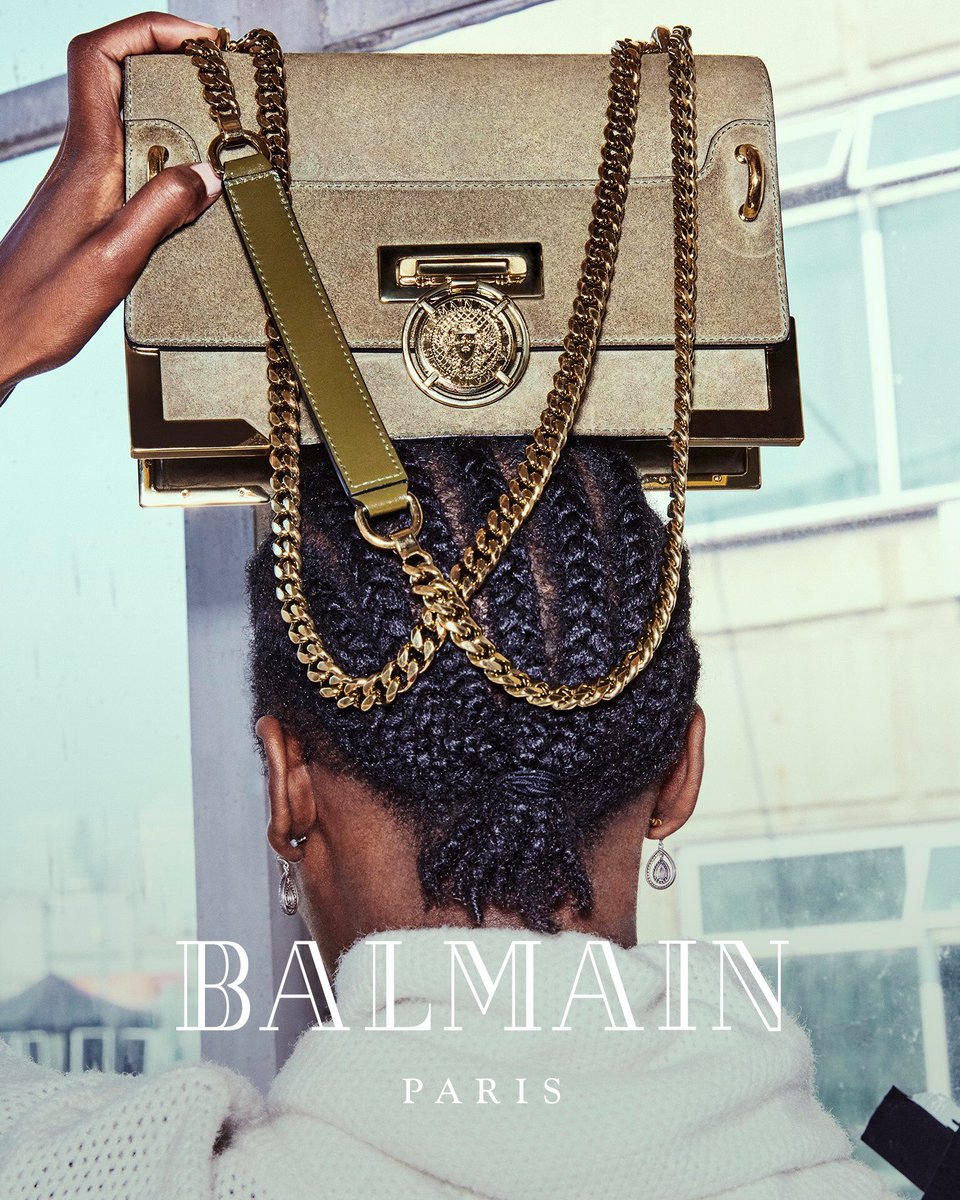 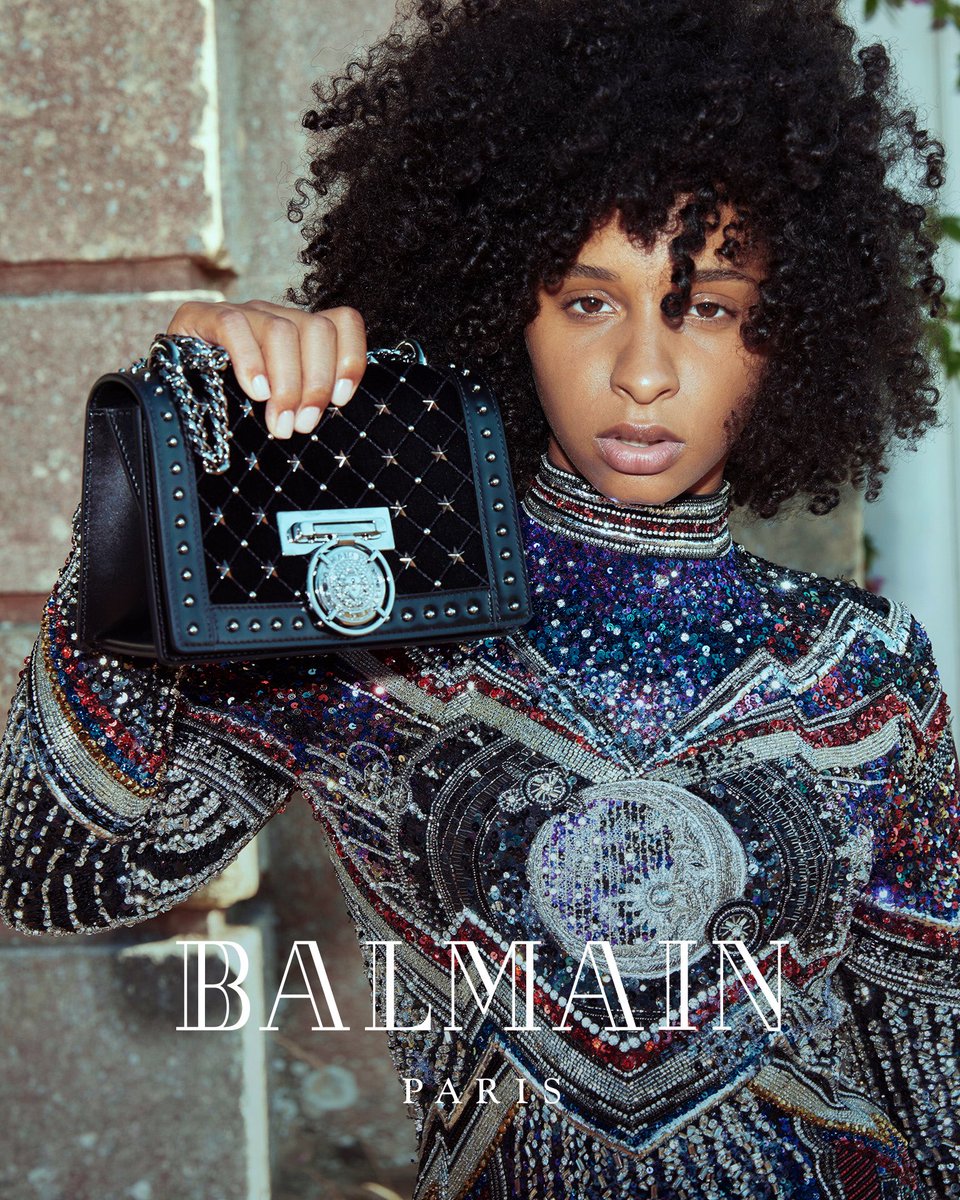 Like every French kid growing up in the nineties, Olivier Rousteing was obsessed with The Fifth Element. So, obviously, there’s no need to tell him that Milla Jovovich is an incredible actor and a stunningly beautiful woman. Rousteing stated that he’s been long admired her strength, style and talents and often dreamed of finding a way to work with Milla on a Balmain project.

In interviews, Olivier often asked to explain what it is exactly in Balmain’s DNA that sets them apart. He said in a statement, ” I often answer that our instantly recognizable silhouette and style is due in part to my insistence on reflecting the way that members of my generation think, live and dress today. My generation’s distinctive spirit, values and taste are echoed in the rebellious attitude of the Balmain Army, the diversity of our runway and the singular tailoring of the house’s offerings.”

“While planning for and shooting this campaign, I wanted to ensure that the same youthful spirit was front and center in each and every final image. By relying on a casting of fresh, new faces and keeping things upbeat and relaxed, my team and I have managed to create a campaign that stands out for its young, spontaneous and positive vibe,” he added. (source)

With a booming music career—more than 1.4 billion streams on Spotify, the lead single on the upcoming Fifty Shades Freed soundtrack—and an acting resume that already includes Oscar and Golden Globe nominations, there’s nothing can stop this young starlet! Inside the February issue of Marie Claire US, Steinfeld opens up about finding love, advice she would give to her younger self, using her platform for good, and many more.

On pursuing her music career: “As an actor, I’m masked by characters, protected by them. But as a musician, it’s my story, my voice, my face. It’s me on that stage talking about that horrible experience I went through and [saying,] ‘Here, I’m going to sing about it.’ It’s such a different kind of vulnerable. To connect with fans, there’s pressure in feeling like I have to do things that I’m uncomfortable with, in terms of opening up enough about myself.”

On finding love: “I’m trying to protect myself and have a bit of a guard up, but I also want to fall in love and know why love hurts.”

Advice she’d give to her younger self: “Listen to yourself. So many people will try and steer you in a certain direction— not saying that that’s the wrong direction at all—but you have to know what’s right for you. Trust yourself, follow your heart, and do what makes you happy. Don’t forget to live for yourself.”

On using her platform for good: “I’ve worked hard and gotten to a place where I have a voice: How can I use it? What can I, as a human, as an artist, do?”

Balmain and L’Oréal Paris have joined forces on a limited edition lip colour collection, designed by Balmain‘s creative director Olivier Rousteing. The lipstick will come in 12 shades and is set to debut later this September. The collection will also feature three lipstick “jewels” in which the product will be encased in a wearable accessory.

Rousteing said that the partnership was an opportunity to make Balmain accessible to a wider audience. “I’m really close to luxury but at the same time I’m also close to pop culture and I think a lot of people who may love the Balmain universe can’t afford the clothes.”

“The collaboration with L’Oréal Paris opens up luxury in a different way. For [consumers] to get a piece of Balmain [makeup] is a way for them to get into the Balmain universe. Makeup has always been part of my aesthetic and my silhouette. Having the opportunity to do that with an institution like L’Oréal Paris for me is an incredible dream,” he continue.