UPDATED JULY 17TH 2014: The cover was photographed by Dusan Reljin.

For the second time, Carolina Herrera has partnered with photographer Greg Kadel for its fall ad campaign.

The images put model Bette Franke in a mirrored environment, accentuating the movement and refinement of the clothes, and with a touch of trompe l’oeil, Franke is captured in multiple looks. Embodying playful femininity, daywear is juxtaposed with eveningwear, and varying textures and new proportions are depicted.

Giovanna Battaglia styled the campaign and Orlando Pita did the hair. (source)

We love the cute and adorable direction! (source) 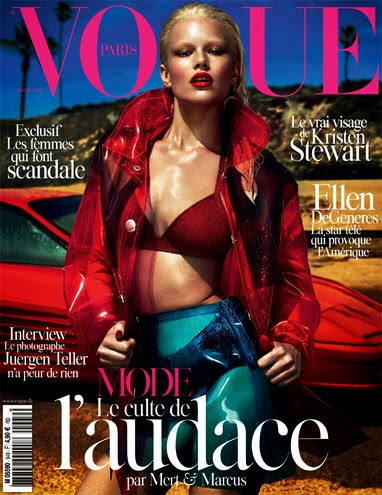 The rising German model is landed her first ever Vogue Paris cover and looks amazing in the Mert Alas and Marcus Piggott photographed image. The bold styling was courtesy of Emmanuelle Alt. (source)

Edita‎ Vilkeviciute and Tyson Ballou are teaming up once again with Daniel Jackson for the new campaign of Calvin Klein White Label. Alastair McKimm responsible for the styling. (source)

Cara Delevingne and Patrick Kafka are starring in the fun Fall campaign from Pepe Jeans! (source)

The campaign with Esther Heesch is photographed by Satoshi Saikusa. (source)

Vanessa Axente and Clark Bockelman are fronting the new campaign image of Calvin Klein Platinum Label that was snapped by David Sims under the styling direction from Joe McKenna. (source)