This is such an amazing early birthday gift for Adriana. She landed her first ever cover slot for Vogue Italia! As usual, Steven Meisel photographed the cover. (source)

The campaign is styled by Joe McKenna. This is Jason Wu‘s first campaign for the German brand. (source)

Moschino goes the total opposite direction for their Fall Winter 2014 ad campaign!

Instead of showing the bright, bold and kitschy image (just like the collection itself) for their latest campaign, they produce this elegantly monochrome image with supermodel Linda Evangelista who was shot by well known photographer Steven Meisel. This Jeremy Scott first collection campaign was styled by the one and only Carlyne Cerf de Dudzeele. (source) 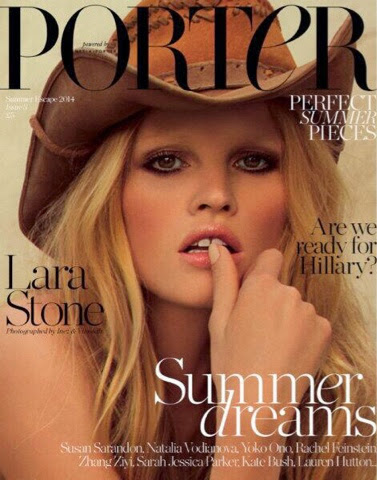 Inez Van Lamsweerde and Vinoodh Matadin photographed the Dutch supermodel for the latest cover of Porter magazine. The issue will hit the newsstands on June 06th. (source)

The styling is a bit heavy for a farm inspired photoshoot. (source)

The image by Michelangelo di Battista is a reprint from her editorial in InStyle US April 2014. She’s wearing Mary Katrantzou Spring 2014. (source)

Based on Wikipedia, Tahliah Barnett (born 16 January 1988), known as FKA twigs, is a British musician and dancer originally from Gloucestershire and currently based in London. The “FKA” stands for Formerly Known As. She has Jamaican and Spanish ancestry. The cover is shot by Inez & Vinoodh. (source)