Looks like the models are Anais Pouliot, Daria Pleggenkuhle and Diana Moldovan. (source)

Actress Asia Argento is reprising her role as the campaign face for Ermanno Scervino. (source)

British model Cara Delevingne is reprising her role as the campaign girl for Mulberry. She’s once again collaborates with fashion photographer Tim Walker.

Here’s an excerpts from WWD article: Mulberry has rounded up a coterie of furry and feathered friends — alongside the Brit model Cara Delevingne — to be the faces of its spring campaign. The ad campaign, which was shot by Tim Walker, a regular collaborator of the house, sees Delevingne partaking of a quintessentially English tea party with characters including a tortoise named Pukka, a cockatoo called Spud and a pony known as Dusty. Clearly, Delevingne doesn’t pay attention to the adage about avoiding working with animals, as the model has already been shot perched on a tree branch, surrounded by owls, for Mulberry’s fall campaign. Mulberry has also revisited Shotover House, an 18th century country house in Oxfordshire, as the location for the campaign, after shooting the fall campaign there.

The campaign was art directed by Ronnie Cooke Newhouse and Stephen Wolstenholme of House and Holme, while Edward Enninful was the stylist, makeup was by Val Garland, hair by Malcolm Edwards and the set design by Rhea Thierstein.

Mulberry brand director Anne-Marie Verdin, said that Walker’s work gives “a romantic, literary and very British feel to the Mulberry brand.” Cooke Newhouse added: “The spring 2014 campaign was a beautiful but naughty tea party with Cara and her ark of animals — the perfect Mulberry moment. They didn’t have the best table manners, but Cara was very forgiving.” The campaign will break in the February issues of U.K. Vogue and U.K. Elle. (source) 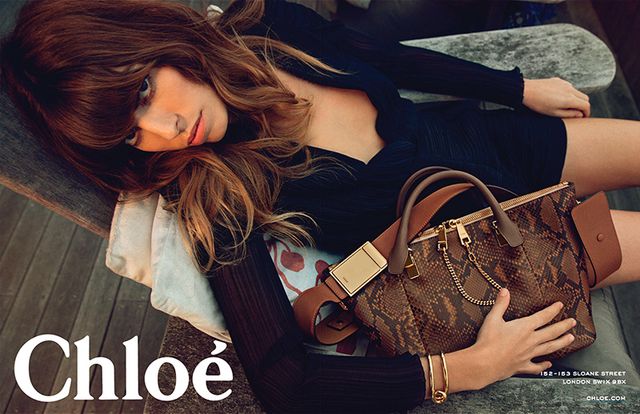 Click the links to view past campaign images of Hunkydory: Fall Winter 2013 and Spring Summer 2013