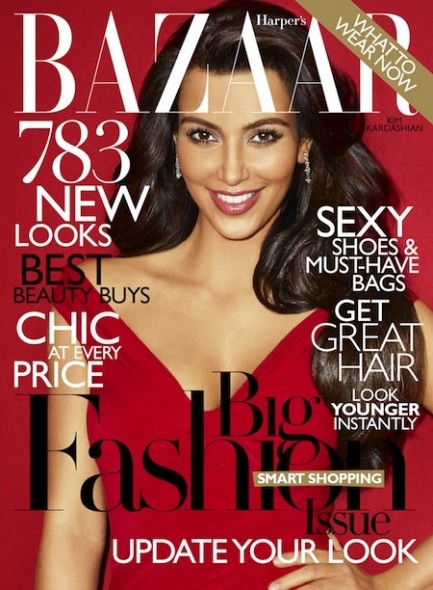 So, we would never thought that reality Queen Kim Kardashian will EVER lands a Harper’s Bazaar cover!! This red cover lensed by Terry Richardson kinda have the same tone as Christina Hendrick’s November cover, no? Terry also lensed that Hendrick‘s cover. We prefer this year’s cover than last year’s Kate Moss.

We heard that some of her covers are the magazine’s best selling issue, so could we expect more of her on the front pages in the future? Absolutely! And we are looking forward to see her editorial and the contents of the issue because eventhough Harper’s Bazaar US newsstands covers are not the most flattering covers compared to others, but their contents is rarely disappoints.

A good source for an Uber Cool Persona. END_OF_DOCUMENT_TOKEN_TO_BE_REPLACED
This entry was posted on Wednesday, February 9th, 2011 at 1:49 PM and tagged with Harper's Bazaar US, Kim Kardashian, Terry Richardson and posted in Actors and Actresses, Cover, Magazine, Photographers. You can follow any responses to this entry through the RSS 2.0 feed.
« Sonia Rykiel Spring Summer 2011 Ad Campaign
Keira Knightley for InStyle Germany March 2011 »