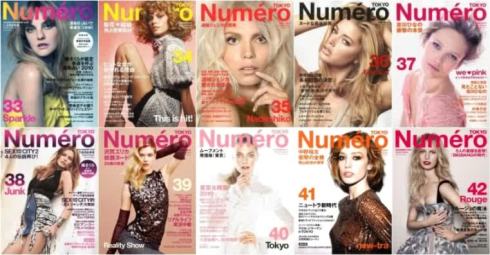 Numéro Tokyo started this year with an ombré Numéro font and Caroline Trentini as their cover girl for its January February issue. Maryna Linchuk with big hair, sitting awkwardly for their March cover.

Karmen Pedaru bleached her eyebrows for Numéro Tokyo’s June cover while one of our favourite catwalker Edita Vilkeviciute posed in a Louis Vuitton SS 2010 collection for July August issue.

Our favourite is the Maryna Linchuk and Constance Jablonski‘s covers. What is yours ?

Thanks to TFS for the image.

This entry was posted on Friday, October 22nd, 2010 at 6:20 PM and posted in Cover, Magazine, Models. You can follow any responses to this entry through the RSS 2.0 feed.
« Valisere Lingerie 2010 Ad Campaign
Julia Roberts for InStyle Czech November 2010 »